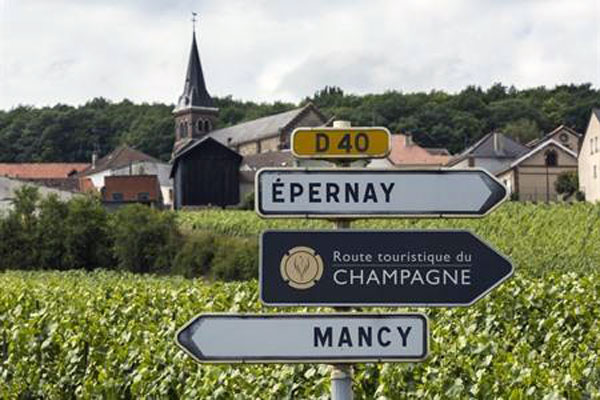 
It has been announced just as picking starts in Champagne that the region has agreed a dramatic yield reduction for the 2020 harvest that will see the amount produced fall by almost 100 million bottles compared to the region’s usual output. Vineyards that belong to champagne producers throughout the Champagne region of France are identified with stone markers according to the producer and grower of the three champagne grapes. For this year’s harvest, which started yesterday, the growers and makers of Champagne have, after protracted negotiations, agreed on a yield of 8,000 kilos / hectare, which will produce the equivalent of 230 million bottles. This is a significant reduction on average yields in the region, which tend to be around 10,800 kg/ha, which is enough to produce around 315m bottles, although last year’s vintage was set at 10,200kg/ha – the equivalent of 300m bottles.

The growers, who are now able to charge on average more than €6 per kilogram of grapes, want yields to remain similar to previous recent levels of more than 10,000kg/ha to provide them with enough money to cover the high costs of managing vines in Champagne and an income (based on an average vineyard size in the region of 3 hectares). The houses, who have to pay for the grapes, make the wine, and market it around the world, don’t want an abundant supply of bunches as it will lead to oversupply and a resulting price depreciation, with a knock on affect on the upmarket positioning of Champagne. As a result, they are pressing for a limit of 6,000-7,000kg/ha (which is around half of what the region is expected to naturally produce from this year’s harvest). In short, it seems a compromise has been struck, although it will cost the growers in the short term. Should grapes prices remain the same on average for this year’s harvest as they were in 2019, which was €6.55 per kilo, then growers stand to lose €14,410 per hectare, with a yield last year of 10,200kg/ha bringing in €66,810 per hectare, and 8,000kg/ha accruing €14,410 / ha in 2020. Considering the average vineyard size for a grower is 3 hectares, the yield drop announced today will see their annual income fall by more than €43,000.