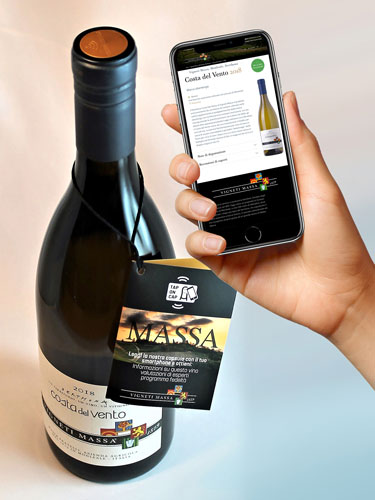 Joint-owned by Timorasso pioneer Walter Massa, Vigneti Massa has launched the 2018 vintage of its wines with Guala’s new connected closures.

The closures on bottles of its Derthona Costa del Vento, Derthona Montecitorio and Derthona Sterpi will now provide consumers with detailed information on where the wines were made and the vineyards in which the grapes were grown. Tasting notes and expert reviews can also be viewed.

Guala has developed the technology in partnership with Luxembourg-based software company Compellio.

The consumer will also be able to verify the authenticity of their bottle thanks to blockchain technology. The closures are connected to a blockchain platform, with each bottle having a unique identification code.

The NFC caps have already been presented in Italy, Switzerland, Austria, France, Great Britain, Scandinavia, USA, Russia, Japan, Korea and Singapore and will be available from April 2020.

Piero Cavigliasso, Guala Closures’ Group innovation technology director, commented: “This is a revolution in the European wine industry, which we have already applied to other markets in the USA.

“We are very pleased to be able to launch this product in Europe starting from the Italian market alongside an extraordinary professional such as Walter Massa, who has demonstrated once again that he is a forerunner by grasping the potential of this product.

“In actual fact, the oenologist Massa is the first wine producer in Europe to adopt our wine screw caps equipped with integrated NFC system, the second in the world after the Californian Böen, part of Copper Cane Wines & Provisions.”

Massa added: “Nowadays, growing vines is as great a privilege as drinking the wine. I’d like that the attention and the respect that I apply to managing the vineyard – as many of my colleagues do – with the least possible environmental impact and the care taken in the cellar during the winemaking, ageing and bottling processes, are enhanced in the purest way in the glass, without natural or manufacturing pollution.

“The bouquet must absolutely not be polluted by abnormal odours and the wholesomeness of the wine must not undergo any alteration. The aluminium closure, completely neutral, guarantees perfect protection and conservation over time.

“One phenomenon that is not talked about much is the counterfeiting of great wines, which for the community in question usually regards reds. As well as providing a new experience for the consumer, the NFC system guarantees the fight against counterfeiting and the “black market” for these pearls of nature, assuring their authenticity and traceability.”