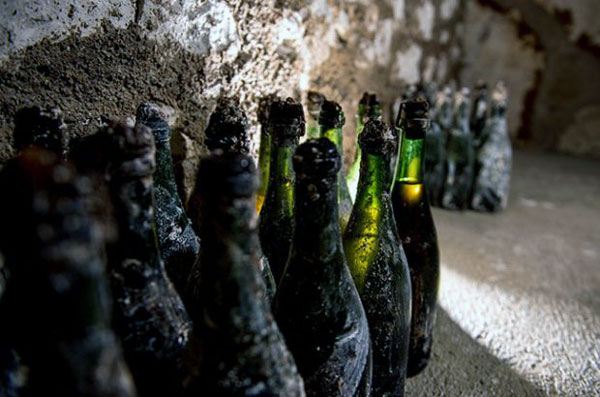 The first 120 year-old bottles of Pol Roger Champagne were opened in Epernay , having spent more than a century buried in sodden chalk after a cellar collapse in 1900.

It was a catastrophic event that nearly bankrupted the Champagne producer, but almost 120 years later, Pol Roger has opened two bottles unearthed from its collapsed cellars, which caved in at the turn of the last century.

As previously reported by db, Pol Roger lost as many as 1.5m bottles of Champagne – representing around half its stock at the time – after a period of heavy rain caused its underground cellars to cave in during the night on 23 February 1900, burying the fizz in wet chalk and clay.

However, on 15 January 2018, while Pol Roger was beginning the process of building a new packaging facility above the site of the collapsed cellars, the Champagne producer discovered a void.

Among large amounts of broken glass, over the course of several days of careful digging, Pol Roger found 23 in-tact bottles, which it removed, and sealed with wax.

However, rains then forced the excavations to stop, as the historic cellars 25m below the ground began to fill with water, before resuming digging again in December the same year, and yielding as many as 100 bottles, although not all of these contained the correct level of Champagne.

Then, on 15 January this year, the void caved in, proving the unstable nature of the historic cellars, and forcing the digging to cease for the foreseeable future.

Nevertheless, Pol Roger, over 118 years since the cellar collapse, has a stash of bottles containing clear wines, with correct levels, and in-tact corks.

While the producer can’t be exactly sure what vintage they are from, the bottles are believed to hail from harvests from 1887 to 1898.

Recently, several months after the underground explorations stopped, it was decided to open the first historic, buried bottles from the excavation, and see what they tasted like – and db was there to witness it.

Two wines were opened very gradually within Pol Roger’s bottling facility before later being served in its tasting room to a small group of press.

The first wine was believed to be the younger, hailing possibly from the 1897 vintage, as it was still on its lees, and thought to have been undergoing secondary fermentation when the cellar collapsed.

Pol Roger cellar master Damien Cambres described the Champagne, which had lost its fizz, as containing aromas of spice and vanilla, comparing the nose and flavours in the wine to aged Cognac.

The second, which was believed to be older, and disgorged and dosed, seemed to have a bit more “volume” according to Cambres, with “extraordinary freshness, citrus and exotic fruit”.

Both wines amazed the attendees due to their lively character, and, despite their ancient state, the fact they were still pleasant to drink.

Fifth generation of the Pol Roger family, Hubert de Billy, expressed his mixed feelings about the find. “We are very proud, but it was a dream, a story that the family like to tell, and now it is a fact,” he said’.