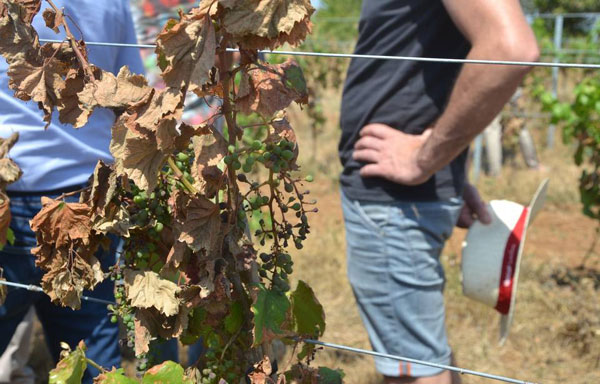 Jérôme Despey, Agriculture Chamber President and winegrower in the Herault area of Languedoc-Roussillon, was the first to sound the alarm. After temperatures rose to 48°C in his vineyard on Friday, June 28th, Despey told French wine website Vitisphere, he saw burn spots appear. The next day, the leaves were curled and the grapes dried out. He later confirmed this claim to Meininger’s.

His six hectares of Carignan grapes were particularly badly damaged, with losses of 60% to 80%. Carignan is one of the ancestral varieties of Languedoc, known for its resistance to drought, but burn rates will depend on pruning styles and leaf cover.

In a press release update after a tour of the Herault area with officials and talks with growers, Despey described the sunburn damage to grapes and vine leaves as ‘‘extensive’’.

Despey said the heat was an ‘‘exceptional’’ climate event with ‘‘consequences’’ for the vines that have never been seen before, with the greatest damage done in eastern Herault. For Despey, the heatwave has additionally highlighted the issue of water conservation and irrigation. In his own vineyard, Despey said the vines he irrigated were the ones that showed the least damage.

In the Rhône, the worst affected areas appear to be the Gard, which France’s agriculture minister, Didier Guillaume, is due to visit at the end of the week, and Vaucluse.

Technical specialist with one of the area’s main wine associations, Inter Rhône, Julien Ducruet, said the national heatwave had brought record temperatures of almost 47°C to vineyards in his area.

‘‘The main damage appears to be plots facing west, southwest,’’ said Ducruet. ‘‘The heat came at a very sensitive moment for the vines, at the end of the spring, when leaves and grapes are green and very tender,’’ and they find it hard to withstand those kinds of temperatures, he said.

In the worst cases the young grapes turn black and die. The leaf cover that is so badly needed during the summer months will is also be reduced.

On a more optimistic note, Ducruet said that while individual plot losses were significant—up to 20% or 30% in some cases—the damage across the Rhône region appears to be much lower, at about 1% to 5%. He stressed, however, that all figures were provisional and could change as more news comes in.

The national weather service, Météo France, which offers a 14-day outlook, does not expect to see temperatures in the area rise much above 30°C in the next two weeks.

Wine growers in both the Languedoc-Roussillon and the Rhône should instead brace for storms that look set to break out across the south east of the country over the next few day and particularly on the afternoon of Saturday July 6th.