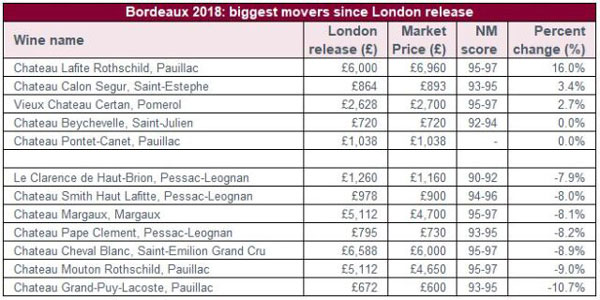 ‘According to Liv-ex’s data, of the 47 châteaux that released prices for their wines last summer that are listed in its Bordeaux 500 index (which tracks the last 10 vintages of 50 leading estates), just three have seen their price trend upwards since.

The rest have either not moved in price at all or have drifted to some degree, the most severe being -10%.

As Liv-ex briefly sketched out in a refresher and as the drinks business reportedly extensively at the time, the 2018 en primeur campaign was a “perplexing” one.

With the 2016 vintage considered great but with an occasionally frustrating en primeur, 2017 yielding some good wines but ending up a car crash campaign that was wildly misjudged, into the breach stepped the much lauded 2018s last summer.

The initial critical reaction, at least from some headline critics, was extremely positive. Some estates received their ‘best scores’ ever, the notes were full of boundless enthusiasm and platitudes that immediately elevated the vintage to the same pedestal as 2016’.