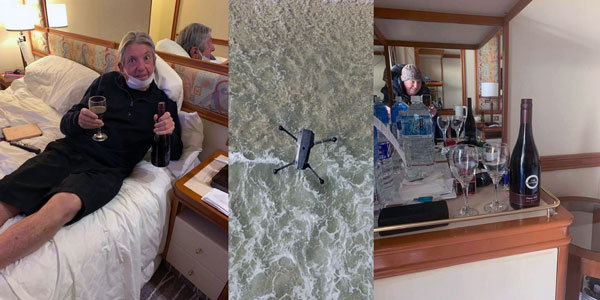 ‘Being quarantined on a cruise ship in Japan due to the coronavirus outbreak has proved no barrier to an Australian couple’s desire for wine, after a successful delivery was allegedly made by drone.

Dave Binskin, with the wine allegedly obtained by drone.

Jan and Dave Binskin, from Palm Beach in Queensland, were confined to their cabin on board the ship Princess Diamond after receiving news that confirmed cases of coronavirus had been detected on board.

Having started their journey on 20 January from Yokohama, the trip was meant to have ended on 4 February.

According to the Binksins, there are now 130 confirmed cases on board the vessel, which can hold 2,670 passengers and 1,100 crew.

The cabin confinement, however, proved too much for the Binskins, who have been attempting to pass the time by playing cards, pacing their room and practising Zumba fitness dances.

In a Facebook post, the couple claimed to have contacted their wine club, which managed to organise a wine delivery via drone, much to the bewilderment of the Japanese coastguard.

They wrote: “On a lighter note in the middle of the Kaos yesterday we get a ring from our wine club. I asked do they do free freight to Japan. We have arranged for 2 cases to be delivered by drone.”

The couple state that the bottles did not come from one of the ship’s many restaurants, stating that all bars have closed owing to the disease outbreak.

Official statements from Princess Cruises, which owns and operates Diamond Princess, said that the team have “activated new in-room entertainment offerings” to ease the cabin fever.

A total of eight new satellite TV channels have been made available to guests, with over 80 new video-on-demand releases. Newspapers are available in 36 languages, with a range of board games, kids’ activity packs and food and beverage options all able to be delivered to rooms. Outdoor time has been allocated to people staying in interior staterooms under guidance from the Japanese Ministry of Health.

Princess Cruises has also revealed that it will be offering full compensation, in the form of refunds or credit, for all passengers involved.