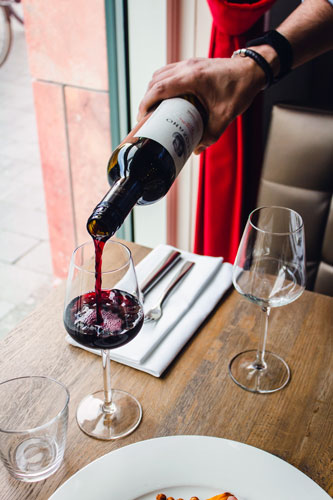 ‘Basic Bordeaux wine is now trading for less than the break-even point for growers, putting many in financial peril.
The classed growths might be bathing in the glow of high prices and global high regard, but the ordinary Bordeaux vigneron is doing it hard right now. French financial newspaper Les Echos reported this week that the price of bulk Bordeaux had fallen to less than a euro a liter, with a fair possibility that prices could crash even lower.

While prices for organic and biodynamic wines remained healthy (around three times the price of non-organic wine), the fall in price will have a devastating effect among vignerons, the traditional Bordelais grower-winemakers, one prominent Bordeaux winemaker predicts. And things have become so desperate that Bordeaux's interprofessional body, the CIVB, has stopped publishing bulk-wine prices in local newspapers.

Wine in Bordeaux has traditionally been traded in 900-liter units (the tonneau, equivalent to four standard 225-liter barrels) and it fell to €930 ($1026) per unit for the 2018 vintage wines in December. Some sales since have happened at lower levels; Les Echos reported transactions at the €800 mark and even some as low as €700. Some wines apparently didn't find buyers even at that level. In 2015, the average price per tonneau was €1215.

"At this price, you don't live and you don't even cover the costs. Below €1000, it's difficult to even pay yourself a salary," Olivier Lavie, a chartered accountant with Sageco, who works mainly in the wine world, told Les Echos.

CIVB president Olivier Farges said the problem was – like much of the wine world – partly about oversupply, but also about buyer apathy: "The problem is not so much one of stocks as that of the sluggish market," he said.

Liber Pater's Loïc Pasquet, a long-time vocal critic of the CIVB and other wine regulatory bodies, isn't at risk of having to survive on less than a euro a liter for his wine – the 2015 vintage of Liber Pater has a $33,000-a-bottle price tag – but he is certain where the blame lies. The devaluation of wine into a single "Bordeaux" style is a major reason for a lack of interest in the wines, and the current oversupply of indistinguishable – and undistinguished – wine.

"At these prices, wine is cheaper than water," he told Wine-Searcher. "It's the result of INAO and CIVB policies these past 15 years – like the infamous 'typicity' rules enacted in 2009 in the appellations' technical requirements. This simplification of the taste was advocated by the CIVB, which spends €7 million telling the world that Bordeaux is 'Many châteaux, one style'. It's the negation of the specificity of place, the negation of 'climat'. And you can easily foresee that the arrival of hybrids will finish this imposition of a ‘typical’ wine, an industrial wine. It’s the death sentence of Bordeaux, signed by our own institutions."

On the other hand, it is good times for organic wine, which sells for up to three times as much, or around €2200 for a 900-liter unit. "Today, when it is a little panic, we push people towards this approach, when for a long time we were ignored and the CIVB did not support us at all," said Dominique Techer, secretary of the Confédération Paysanne de Gironde and an organic winegrower in Pomerol. Pasquet agrees.

"Farges, CIVB president is not a vigneron, and Christophe Chateau, his communication director thinks organic agriculture is a load of old tosh. They show off in public meetings and explain that Champagne is doing worse than Bordeaux and that Bordeaux's future lies in Brazil and India! It’s true – that countries with up to 400% tariffs are the future! Fortunately 'le ridicule ne tue pas' [a French expression that translates as: being ridiculous does not kill you]. These words show a complete lack of understanding of the markets and clients. They kill vignerons and sink families into penury. The powers that be have no vision, no knowledge of the markets, even after being there for 10 years; they need the courage to acknowledge their failure and leave. There are great vignerons and great terroirs in Bordeaux, but they all leave the AOCs because the AOCs are no guarantee of quality anymore, just a guarantee of homogenized, industrialized wine. The way they are going, a barrel will be at €500 by the end of the year."

The collapse in wine prices also has repercussions for the real estate local market, according to local consultant Michel Lachat.

"In the least valued appellations like Bordeaux or Côtes-de-Blaye, we are seeing an increase in the number of plots for sale for which there are very few buyers. They are often the lowest quality [vineyards] or those often affected by frost and whose production is often marketed in bulk. If the crisis lasts, there is a risk that whole properties will enter the market”.