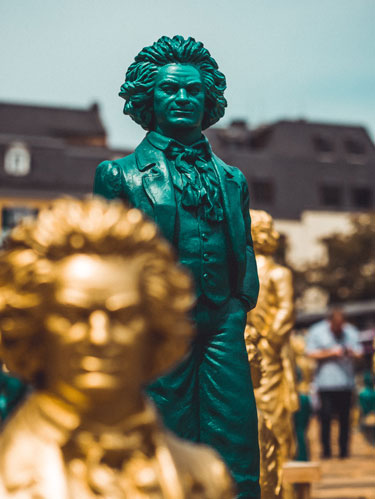 ‘A researcher at Mount Sinai School of Medicine has measured the amount of lead in two skull fragments of Ludwig van Beethoven and found that it was unlikely for lead poisoning to have caused the renal failure that was partly responsible for Beethoven's death, eliminating one of the many suggested causes of death for the famed composer.

"Ninety-five percent of lead in the adult body is stored in bone, where it stays for years, even after death," said Andrew Todd, PhD, Associate Professor of Preventive Medicine, Mount Sinai School of Medicine. "Measuring the amount of lead in Beethoven's bone fragments allows us to reach back through time to measure his lead exposure during life."

Skull fragments from Beethoven were examined using a technique called x-ray fluorescence (XRF). XRF does not damage or destroy the sample and has been used by Dr. Todd in many studies of the human health effects of lead. A very small radiation dose (about the same dose as 10 minutes of natural background radiation) is used to make the lead stored in bone give off x-rays, which are recorded in a radiation detector. The larger skull fragment was found by Dr. Todd to have 12 micrograms of lead per gram of bone mineral.

"For someone who was Beethoven's age, we would expect more than that; one comparison dataset predicts 21 micrograms of lead per gram of bone mineral," said Dr. Todd.

Lead exposure is known to cause irritability, for which Beethoven was renowned, as well as colic and kidney failure, from which, along with liver failure, Beethoven is thought to have died. Currently two dozen or more health issues have been suggested for Beethoven, some of them deadly. This work largely rules out one of them.

According to Dr. Todd, there have been many explanations put forward about Beethoven's death. Some have found high lead levels in Beethoven's hair, which can show lead exposure only from the last several months of his life. According to a researcher in Vienna, that reading could have reflected the treatment used to heal a wound from surgery Beethoven underwent in an attempt to save his life. Such treatment in those days consisted of salves that might have contained lead. Dr. Todd's bone measurements quantify lead over Beethoven's entire lifetime.

Others have theorized that Beethoven had high lead exposure from the long used practice of sweetening the cheapest wine with lead. But, those theories have been disputed based on records Beethoven kept when he became deaf which showed he had the resources to buy more expensive wines.

The skull fragments Dr. Todd measured are thought to have been obtained the first time Beethoven was reburied (in 1863) by a physician, Gerhard von Breuning, who as a boy had been a friend of Beethoven's and who was a comfort to him in his last months. Dr. von Breuning is thought to have given the fragments to Romeo Seligmann (the first Professor of the History of Medicine at the University in Vienna) in whose family they have remained.