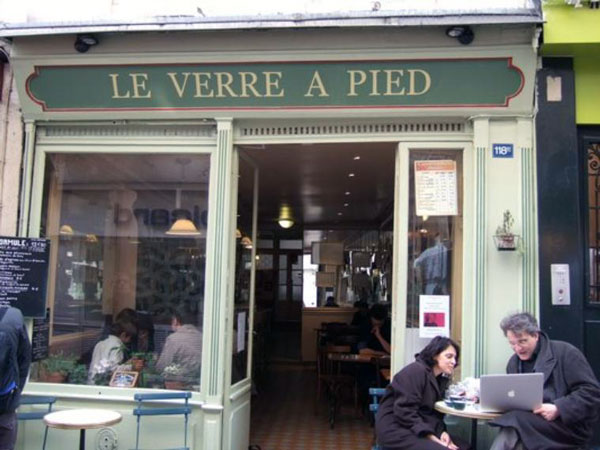 ‘The French bistro practice of serving wine in very basic glasses can annoy wine lovers from elsewhere. But, says Aaron Ayscough, there's a reason for those small glasses.

Many things are smaller in France: cars, portion sizes during brunch, the workweek. But nothing raises the ire of anglophone wine writers like small wine glasses – the simple ones, of modest volume, which are iconic to the French bistro.

Wine writer Simon J. Woolf, author and contributor to Meiningers magazine, recently tweeted that he hates “the teeny-weeny wine glasses that are so often preferred at French-focused natural wine establishments.” Financial Times wine critic Jancis Robinson replied, “Grrr. Don't get me started about wine glasses in France.” Below each tweet, a chorus of anger at the sorts of wine glass used at Paris wine bistros like Le Baratin, Aux Deux Amis, or Coinstot Vino. “If you claim to be a top class restaurant or a top class wine bar,” wrote one aggrieved commenter, “serve the wines in the correct glasses dammit!” Perhaps unintentionally, the comment touches upon the linguistic misunderstanding between French wine bistros and the anglophone wine folk aghast at their glassware.

In English, the word ‘restaurant’ is applied equally to fast food joints, gastropubs, and white-tablecloth dining establishments; but the French differentiate between informal bistros and more formal restaurants. ‘Restaurants’, in France, are subdivided between standard restaurants and ‘gastronomic’ restaurants, the latter of which usually aspire to Michelin stars. In France, elaborate glassware is almost exclusively the province of restaurants. If one finds oneself in a bistro or wine bar that offers no Zaltos or Spiegelaus, it is first and foremost because one is in a bistro or wine bar. There are also more anodyne reasons: simple glassware is cheaper, easier to wash, less breakable, and takes up less shelf space. This makes it appropriate for dining establishments with limited space and in economies with higher labour costs and lower margins on wine; there is a bigger picture to bear in mind when griping about simple glassware. More significantly, in serving celebrated wines in modest glassware, high-end bistros and wine bars – in France and beyond – make a gesture that is as political as it is aesthetic. They are highlighting wine’s origins as an agricultural product, meant more for the kitchen table than the auction block. How people expect wine to be served is reflective of wine’s historical role to a given society. In France, as in other nations with a long history of viticulture, there is a continual cultural tension between wine’s origins in peasant farming communities and its parallel status as a luxury product. Outside of the self-conscious luxury of a gastronomic restaurant, it is viewed as pretentious to embellish wine service with ostentatious glassware.

Wine as a ‘right’

“It’s an idée réçu,” says longtime Paris wine buyer Guillaume Dupré, of Paris wine bistro Goguette. “People see very voluminous glasses and they immediately think it’s going to be expensive. Whereas, with our bistro glasses, we go for warmth, sharing, the values of a simple meeting place.” Such an approach works in France, where wine is considered a right, not a privilege. That is why wine is ubiquitous in bistros as well as in restaurants. As Ardèche winemaker Gilles Azzoni explains, “There was a time in bistros in France when a tiny little glass of wine, basically a mouthful, was 1.5 francs. So you’d drink three glasses of wine instead of one. It was part of the idea of the ‘bistro’.”

Wine consumption in the New World, the UK and Asia, on the other hand, rarely springs from peasant origins. There is no popular expectation of wine service outside the context of a fine restaurant. From this dynamic derives the expectation that all dining establishments – even bistros, even wine bars – ought to provide elaborate ‘restaurant’ glassware for wine. Chambolle-Musigny? A Burgundy glass! Saint-Émilion ? A Bordeaux glass! Tailored glassware programs have become such a predictable part of the luxury restaurant experience that more enlightened wine directors are beginning to abandon them entirely. At New York’s Frenchette, wine director Jorge Riera offers just one wine glass, relatively small for the USA. “We use the exact same Riedel stemware [Paris wine bistro] Le Baratin uses,” he says. “We wanted to be a casual bistro with no pretensions, so no fish-bulb-on-long-stem glassware, no ritualistic constant changing of glassware.” Bradford Taylor, founder of Oakland wine bar Ordinaire, concurs: “I hate how Americans fetishize glassware. In general, I see it as a way to distract the customer from the outrageous prices normally being charged. And then the constant changing of glassware for every new wine. It's an insane waste of time.”