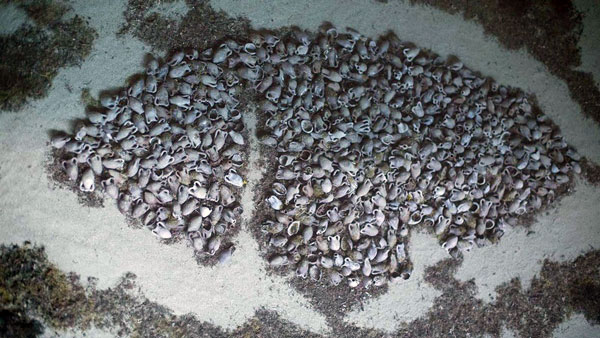 The weather was fine, the waters were calm and the ship was only a mile and change from the port of Fiscardo on a Greek island, carrying a hefty, lucrative payload. Yet something went awry, and the ship went down, taking with it an estimated cargo of around 6,000 amphorae. At 111 feet long, it's one of the four biggest Roman wrecks ever found in the Mediterranean, twice the size of most Roman transport ships—and the biggest yet found in the Eastern Mediterranean.

Thirsty ancient Fiscardans' loss is science's gain. Led by George Ferentinos, researchers at the University of Patras' Oceanus program have conducted an extensive mapping of the wreck, discovered in 2013 and 2014, using state-of-the-art sidescan sonar profiling systems to get remarkably clear measurements and pictures of the seafloor site—more accurate than the typical method of sending scuba divers on Mediterranean treasure hunts. The striking images and data have been published in the January 2020 issue of The Journal of Archaeological Science.

The motherlode of amphorae, they found, came to rest in an oval pile 98 feet long and 39 feet wide, with many well preserved. The researchers assessed the style of the terracotta containers to date the wreck to sometime between the 1st century B.C. and 1st century A.D. Amphorae of that style could transport wine, olive oil, nuts and cereals and held about 25 or 26 liters—meaning that if this was a wine tanker, it would have been hauling the equivalent of around 17,000 cases. So far, "only" about 1,200 amphorae are visible, but the imaging suggests that they were stored in five layers in the ship’s hull; many might be obscured or lost to the sea.

While Fiscardo has a smattering of ruins, its newly discovered big-boat traffic "indicate[s] that Fiscardo was an important port at that time," the authors wrote, providing further "evidence that the eastern Ionian Sea was part of an important trading route" from the Levant to Greece and up the Adriatic.

Next up: sending divers down to pick up some loot and figure out what drinks or snacks were actually in the cargo holds. Unlike the last time adventurers found shipwreck booze, a taste test is not planned.